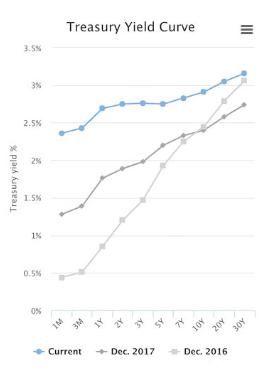 If investors aren’t selling stocks because of the current government shutdown, they might be nervous about the flattening yield curve—broadly defined as a time when short-term interest rates were higher than yields on longer-term bonds. But what does this mean for the markets? Typically, an inverted yield curve signals a recession.

The press has certainly made a big deal out of the so-called inversion of the yield curve, and the recent market pull back indicates the market has already anticipated a recession. But, the yield curve is not actually inverted. Look at the chart above, which shows the curve for Treasury bonds two years ago (light gray line) vs. one year ago (darker gray) vs. very recently (blue). An inverted yield curve would have the left side of the blue line higher than the right—and that clearly is not the case—yet. The curve does seem to be flattening over time, but we haven’t actually seen an inversion. What the press has pointed out is that the three-year rate of 2.84% is slightly higher than the five-year rate of 2.83%—a very small inversion in a very small part of the overall curve. By the time you read this, the 5-year may again be yielding more than the 3-year.

But what if there is a yield inversion? Historically recessions have followed yield curve inversions, but it didn’t happen immediately. For instance, the yield curve was inverted in mid-2007, but the Great Recession hit the economy almost a year later. In fact, recessions could come months or even more than a year after the yield curve had turned upside down, and yields could return to normal patterns before any sign of a recession hit.

So, while professionals will be closely watching the pattern of bond yields going into next year, you shouldn’t believe all the headlines. Sooner or later, there may be a recession, and people following the bond market will probably get out of stocks prematurely, perhaps missing the last runup in stocks. The markets don’t always send clear signals about what they’re going to do, despite what you read, and despite the fact that apprehensive traders seem to be selling at the moment.

Kendall Capital is a wealth management firm providing investment management services in the Washington, DC area to individuals and families with assets of more than $500,000.