If you’re anything like us here at Kendall Capital, you were probably anxiously awaiting the midterm election results, and the impact the expected outcome of political gridlock would have on the markets. Historically, stocks typically do well when Congress is split, and the White House is under Republican control. In these instances, the S&P 500 averages an annual return of 12 percent, according to Bank of America Merrill Lynch. “The best-case scenario from here, in our view, might be gridlock: do nothing, and undo nothing,” wrote Bank of America Merrill Lynch analysts and economists in a report leading up to the election. Democrats did in fact win back the House Tuesday night, while Republicans retained control of the Senate, and investors got the gridlock they were hoping for.

The chart below shows the average annual S&P returns since 1928, based on the political split of the White House and Congress. 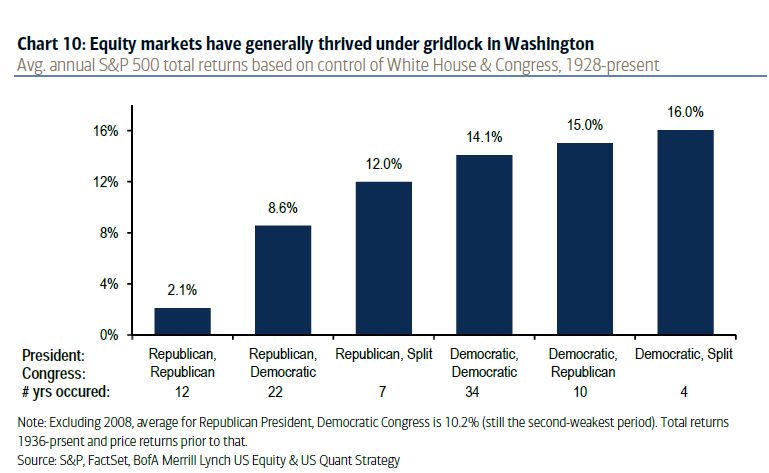 History repeats itself, so far.

When the markets opened Wednesday, The Dow Jones Industrial Average rose 266 points, led by UnitedHealth and Microsoft. The Dow was up 3.7 percent for the year through Tuesday after an October sell-off leading up to the election cut into its returns. The S&P 500 gained 1.3 percent as the health care and tech sectors both rallied at least 2 percent. The Nasdaq Composite rose more than 1.7 percent.

Relief that Republicans held onto the Senate also helped boost stocks, as some investors feared a so-called blue wave clamping down on Trump’s agenda. Stocks rallied across multiple sectors, as shares of Caterpillar, Goldman Sachs, Amazon and Alphabet all rose. Caterpillar is seen getting a boost from continued economic growth and the chance that Democrats can temper Trump’s trade war dealings. There’s also some optimism the president will work with Democrats on an infrastructure plan. Tech shares also rose, as a divided Congress could also keep Trump from seriously going after giants like Amazon for being too big and influential on the economy.

What should we expect next?

Following this week’s volatility and the FANGs selloff this week, we should see traders getting back in and buying the dip. The elections have been a win for both the Republicans and the Democrats, and this will bring balance to the market. Now that the division between warring parties has settled down, the situation is far less volatile and market confidence should resume.